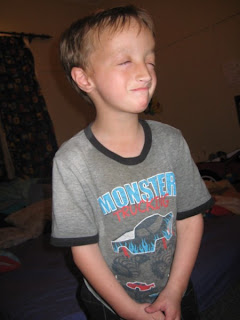 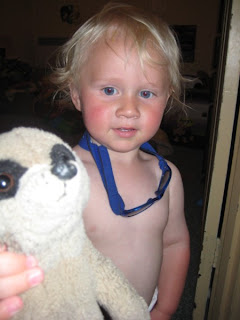 Here are a couple of pictures of the boys taken yesterday. Ryley is pulling his 'funny face' and Braeden is making sure his mate Keto Meerkat is in the picture!

We have finally had some heat here in our part of Australia so it has been quite a shock to the system!

Braeden actually has a pair of jocks on over his nappy (which you can't see) because he has decided he wants to start going to the toilet. I think we are a loooong way off him being toilet trained, but hey if he thinks he is ready himself, then he must be getting close to it...??!! Ryley seems very keen to give the toileting thing a try too, so we are going to attempt to train him too. We figure that if he sees his brother doing it, he might be more inclined to try himself.

Ryley has had some pretty nasty seizures this weekend and spent a fair amount of time feeling crap. He seemed very happy this morning though as he went off to school, despite having been up since 5:30am.

I hope the warm weather sticks around. It is really nice being able to do things outside at night when the kids are in bed. It is so relaxing!