Showing posts from July, 2010
Show all

July 30, 2010
To announce that the Toddler (aka Braeden) has decided he will NOT wear nappies during the day anymore. NO MUM NO! He can ONLY wear jocks. Nevermind that he forgets to tell me he needs to go to the toilet about 50% of the time. Sigh. Some battles you just can't win. (Or even compromise on, like, say, with pullups or something...)
3 comments
Keep reading

July 27, 2010
Am having a little blogging break right now. Work is flatout and incredibly stressful. The kids need a Mum who, when she is home, is home to give them her full attention. So FB, Blogging etc are going on the backburner. I won't be long.
2 comments
Keep reading

July 21, 2010
*Disclaimer: Before you read this post, please note that I am not debating abortion and whether or not that is right or wrong. I am discussing the article published in a newspaper which is in regards to children who have disabilities. I don't wish to debate termination of foetus' who have a diagnosed disability, and this blog post will not reflect my thoughts on that subject in any way. On the front page of one of our major newspapers was THIS ARTICLE . Go on. Have a read. Somewhere in amongst the comments, they have published mine. Basically the article is about two seperate families who have children with Down Syndrome. They have decided to sue their doctors for failing to tell them that they were carrying children with T21. They would have like the opportunity to terminate. Both families would have terminated. They believe that the birth of their children was 'wrongful' and they are therefore suing for various reasons, one of which is 'psychiatric injury
6 comments
Keep reading

If I may ask why did Ryley need to have so many of his teeth pulled?:) Kristy

July 17, 2010
HI Kristy, I didn't really explain that in my blog post did I?! Ryley had very bad teeth. He used to grind his teeth, so the back molars were actually ground down to nothing. All his teeth were weak to start off with, so the combination of grinding and then all the medications that he has had for the past 8 years has meant that they were decayed to nothing (plus we have no flouride in our water, so to some degree that hasn't helped I guess!). He didn't even get all of his baby teeth! So he was missing some of his molars and some of them were only stumps, so hadn't formed properly. His bottom teeth were only just starting to rot, but they felt that they were the ones in danger of causing him the most pain, so needed to get them out as well, even though they looked ok. I think teeth issues are part of WHS. Until his top teeth started to noticibly be eroding away, we didn't think there was any issues. We rarely got to look in his mouth, and teeth cleaning alwa
1 comment
Keep reading

July 15, 2010
Something I talk about with families regularly is the emerging skills that their children have. Usually this is formally identified by therapists, or by using an assessment tool. Often you can see the skill starting to develop, and it is very useful to bring it to the attention of parents who may not have had a chance to notice it. Lately, I have found that Ryley has some emerging skills and I am so excited! This week, he has been helping pack his own school bag. Now, I know that to most people they would just roll their eyes and wonder why I am so excited. But the thing is, packing his own bag is about so much! For example: He has to have the ability to plan and recognise what goes into the bag. So he has to remember the sequence in which things go in. This takes motor planning skills, which is something he has a lot of difficulty with. He will go to the fridge and get his feeds out and put them in the small section of his bag. He then has to go to the bedroom and get his drink cup
2 comments
Keep reading

July 12, 2010
Routine is back. I tentatively sent Ryley to school today, part of me feeling guilty, part of me hoping he was going to be ok. Turns out it was the best thing to do! His teacher wrote that he seemed glad to be back with his friends. I bet he was! He pretty much hasn't been to school for a month! He is down to just having Panadol in the morning and night now and is almost back to his old self I think. I can't believe he has recovered so quickly. He truly has more strength than anyone I know. I feel so relieved at the moment. My stress levels have gone down a notch or two, and I feel like I can start thinking further than a day ahead at a time. Braeden and I had a very quiet day today, we went and fed the ducks at the Lake, we went to the bookshop and bought books, and we even managed to go to the nursery and buy some seedlings and seeds. Braeden really needed the downtime I think. So, we slip back into routine, and hopefully it stays that way!
1 comment
Keep reading

16 Teeth for the tooth fairy

July 09, 2010
Yesterday was one of the days I would rather not remember. Our day began at 4:45am as we all had to get up and  head to Melbourne to be at the RCH by 7am. We had to wait until 10:45am for Ryley to even go into surgery. The poor kid was starving and feeling horrible. I always fast with him, and I felt lightheaded and shakey, so I would hate to think how bad he felt. Firstly, the dentist took xrays of Ryley's mouth. She came out to tell us what she had found. Sadly, Ryley doesn't have many adult teeth. They just haven't formed. So he will never have his top teeth ever again. I think that has been one of the worst parts. Realising that my little man doesn't even have the replacement teeth. I just feel so sad about that. All up, Ryley had 16 teeth taken out yesterday. He has been left with his 4 canines (or fangs). They were the only teeth able to be saved. He came out of surgery very badly. Part of the reason was the pain. Part of the reason was that despite me m
15 comments
Keep reading 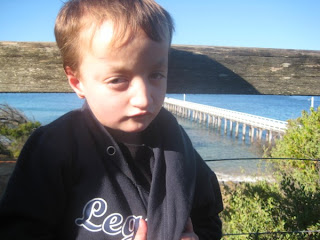 In an effort to cheer up Ryley (and keep the kids amused while on school holidays), I took them for a drive down to Point Lonsdale. I told them we were going on an adventure. It was actually really warm by the water, much warmer than Ballarat! Despite the fact that Ryley is still not that well, he enjoyed himself. Braeden was mesmerized by the waves coming in, and sat on a rock watching the waves for 10 minutes before he started jumping around. The sea air always makes us feel better. I am hoping that it helps Ryley sleep, because he just can't sleep at the moment. My aim is for the next 3 days before the operation to be full of fun and as much laughter as we can possibly fit in.
2 comments
Keep reading

July 03, 2010
I don't know if I even dare and say it...BUT...I think my Ryley is finally on the mend. In an attempt to cheer him up and take his mind off being miserable, David took him and Braeden out to watch the footy at Lexton (his old team). According to all sources, both the boys had a fantastic time!! Cue: BIG SIGH OF RELIEF!! He is still cramping a bit, but the vomiting has stopped finally. I think today was just what he needed (what we all needed, because I got to clean the house with no interuptions). Fingers crossed!!
2 comments
Keep reading

So tired, it hurts

July 01, 2010
Well. (It's a hole in the ground don't cha know). I think I am slightly delirious. I have had pretty much no sleep since I don't know when. I took Ryley to the local hospital last night, only to be told "You would be better off going to the RCH". I had to 'convince' an intern (who seriously looked like he was 12 years old) that I had brought Ryley to the hospital for an actual reason, not just because I wanted to hang out. We still have no answers about what is wrong with Ryley (because since my last post he became crap again). Although he has seemed better today. Do I dare even say that?? Braeden is ridiculously unsettled, and has decided to compensate by breastfeeding all night. I went to a mind blowlingly offensive seminar yesterday on grief and loss for parents who have a child with a disability. It was so offensive that we walked out. The scary thing is that it was for professionals who work and advocate for families who have a child or a
7 comments
Keep reading
More posts