Showing posts from September, 2010
Show all

September 22, 2010
Today, Ryley started Holiday Program for the very.first.time. Who was nervous? Me. Who was worried about how Ryley would go? Me. Why on earth did I waste my energy being worried? Who knows. The agency I work for runs recreational activities and they also run a holiday program. I really only found out all about it recently (keep in mind I have worked here for nearly 7 years). Part of me thinks I wasn't really ready to send Ryley to things like a holiday program, so I probably didn't really pursue the information. And I admit, part of me felt a bit guilty for even considering sending him to a holiday program. Well, now I have learnt. Ryley basically ran in and sat himself down and started playing. Before I even could say goodbye. There were people who already knew him (I swear he knows more people than me), and he was so excited to not be spending the day with boring old mum or dad. So. He has two days each week where he gets to play with his mates, make new ones,
4 comments
Keep reading

September 14, 2010
If you head on over to the Ballarat conference blog, there is lots of updated information! We have finalised the dates for the 2011 conference and announced our keynote speaker (Dr John Carey). Here is a link to the blog: AWHSSG Ballarat Conference We are soo excited to have Dr Carey coming out to Australia. It will be a fabulous opportunity for all our families to meet one of the world experts and hopefully gain further information or learn something new! Now the hard work really starts so that we can pull it all together!!!
2 comments
Keep reading

September 14, 2010
Braeden came in on Saturday morning while I was still in bed and our conversation went a little like this: B: "Mum, sultana in nose" A: "What? You have a sultana in your nose?" B: "Yes" (with a very solemn nodd of his head) A: "Don't be silly, why would you have sultana up your nose" B: "MUM!" (points to his nose) "Sultana" A: "Brae-den" (sighs, looks up his nose, can't really see anything) At this point, I wonder if he is telling me the truth, and tell David to get a torch and the tweezers, just in case. David looks up his nose and sees nothing. I take another look and send the tweezers in because I did see something which may have resembled a sultana. With a bit of squirming from Braeden and marvellous surgical techniques from me, lo and behold, out comes a rather large sultana. A: "Oh Braeden...we NEVER put sultanas or anything else up our noses ok" B:  (with a grave face) "Y
2 comments
Keep reading 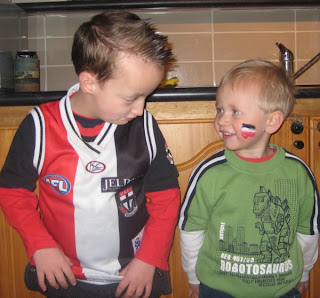 Today is footy day at school today. Ryley absolutely LOVES dressing up in his footy gear. Nice to see him a little happier today too. He has been very grizzly and unhappy lately, and I haven't been able to work out why. I think maybe it's because he has a cold and it is the end of term and he is just tired. He has been not wanting to go on the bus, which is very unusual for him. It is times like this I WISH that he could talk. In amongst all of this Braeden has fully toilet trained himself. I do still put a nappy on overnight, but I don't need to. He wakes up and goes to the toilet if he needs to, and always goes first thing in the morning. It is a little messy at times because he insists on emptying his potty himself. BUT, I am amazed it has been so quick and easy. So here are some pics I took this morning! The boys both deciding whether to smile for me or not Ryley, decides to pull faces Braeden decides to smile
3 comments
Keep reading 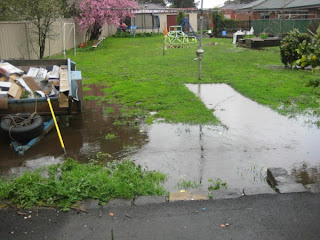 Can't get out to the washing line Vegie Garden area is looking a bit wet Big puddle right around As you can see, our yard has some rather large puddles at the moment! It has been raining here since last night now and it has been non-stop. Something to celebrate really considering our drought ridden town! David has been out working already this morning and is expecting to be called out again any time. He has some amazing photos of roads that have been washed away! If we didn't all have colds and coughs, we would SO be out there splashing in the puddles!!!
3 comments
Keep reading
More posts