April 19, 2010
Have you noticed that I seem to be hanging out with my WHS family a bit lately?
There is a certain kind of peacefulness that goes with being around people who get it. There is no having to cringe at what people say (or pretend that what they have said hasn't just really hurt you).  There is no having to listen to other people complain about things that we would love to have as our only complaint. There is no having to justify or explain anything.
It is just...well...easy.

So, when we decided on a spur of the moment thing to go to the Melb Zoo, we asked if Liv & Elliott and Mel, Luke & Ellie wanted to come too. Unfortunately, because of the very short notice, Mel & co couldn't come (NEXT time I will plan better-actually, I will just plan in the first place!!), but Liv and Elliott could!

We had an awesome time! Ryley of course only really likes the Oranguatans, but he loved having Elliott there because he had a buddy to watch people with. Braeden also loved having Elliott there, just because he loves him! Braeden had a ball watching all the animals and running around climbing on things. He did two laps of the reptile exhibit and spent an awful lot of time roaring like a Lion!

The great thing about the Zoo is that Ryley loves the sounds, the smells, the busi-ness and he does enjoy the glimpses of the animals...as long as they are doing something and not just sitting there!

We are thinking of Elliott though, who had a tonic-clonic seizure yesterday. Seizures truly do suck. It really isn't what he needs right now. So am really hoping he recovered ok and isn't in hospital right now. 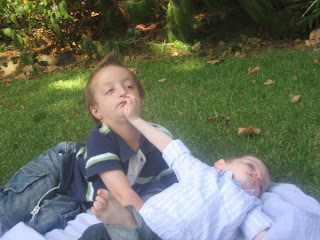 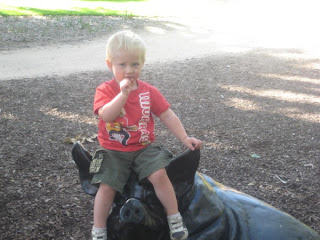 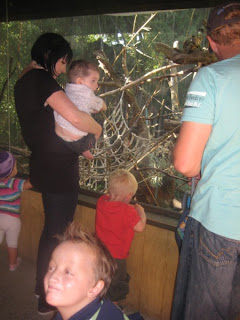 The little monkey that everyone is looking at had a baby on its back. So cute! Of course, check out Ryley. He isn't even looking at the monkey, but look at how happy he is!!