Do we forget about Fathers?

October 21, 2009
Today, I went to a conference in Melbourne on 'Including Fathers'. Parts of it were very interesting, and parts were, well...let's just say thought-provoking.

Over the past 10 years or so there has been an emerging trend in society. The traditional nuclear family rarely exists, and there has been a social shift away from the notion that the father is the 'head' of the household. Dads are now able to take paternal leave either when a child is born, if a child is sick, or most importantly, if they have a child with a disability that they need to care for. More Dads are choosing to stay at home while their wives work, and this is challenging everything we know about child development and family functioning.

So what do we know about Dads and how they influence a child's development?
Well, to be honest, we know a lot more now than we did before. There are a multitude of studies that have all confirmed that the way a father interacts with their child has a huge impact on their development, among other things.
Most people, when they cast their minds back to their own perception of their father when they were growing up, will tell you that their fathers worked and Mum stayed home.
I can tell you from my own experience, that indeed, my own father worked, came home, went out to 'train', ate with us, then went into his study, or went to a meeting. He often did help me with my homework in the later secondary school years, which was at the expense of his own work. Yet despite this apparent 'absentee' father that I had, I still remember a father that was always there when I needed him.

My husband, is a very different father. We share the parenting role. Each of us have clear roles and responsibilities, but at the end of the day we make joint decisions about how we want to raise our children. This doesn't take away from the fact that David works full-time, and up until this year played footy, and he often works extra or works late. But I am not the one that is therefore supposed to raise the children and do all the chores around the house. We share all of that responsibility. David is a very "hands on" Dad. But, I do think that this difference is not necessarily due to the evolution of the role of the father, in fact, I think it has to do with having a child with a disability. I will explore this further on.

What we know now is that, particularly with boys, if a father doesn't engage his children, for example, play with them every day, then it will cause long term behavioural and social emotional difficulties and problems. How so?
The example that was given today was based on a study that is currently still being undertaken. It was based on the notion of 'rough and tumble play' and how important that is in a young child's life. While today the focus was on fathers engaging in this play, I would like to point out that I believe that this sort of play is just as important for mothers to engage in.
So, rough and tumble playtime teaches both parent and child how to physically interact without becoming violent. It teaches turn taking, and it encourages parents to get down to their child's level and have fun and take notice of their child. Sometimes the parent wins, sometimes the child wins. It encourages eye contact, and often gives an opportunity for conversations to happen naturally between a father and their child.
These kind of building blocks need to start when a child is still a baby. Clearly, you wouldn't be engaging in a rough play, but getting down to the child's level, sharing mutual gaze, and enjoying your child is what builds long term relationships with your children, and instills in them the confidence that their needs will be met emotionally.

Many times throughout the presentation, I wondered how this would apply to families who have a child with a disability. And I think that the role of the father needs to be supported EVEN MORE.
There is no doubt that Early Childhood Intervention Services, Specialist Medical Services, Maternal Child and Health Centres are all Mother friendly places. But what about the fathers? How are they empowered and made to feel like they are important in their child's life?

I think back to our experience. I made sure that I always told David about any therapies we were doing. I made sure he came to some of our therapy sessions. He came to as many doctors appointments as he could (he still does). I have tried to make sure that David has always felt as equal as me, despite the fact that he works during the day, which is when all EI services have their appointments avaliable.
We have always had to adapt everything for Ryley. So rough and tumble play definitely has always happened, it has just always been adapted to suit Ryley's needs. With Braeden, it is a different ball game. He just loves wrestling and tickling, and it can be a little rougher.

Fathers often get overlooked when they have a child with a disability. There are not many options for Dads to talk with other Dads about what it is like living with a child who has a disability. So more often than not, Dads use work as a way of escaping their reality. This, then often contributes to marital breakdown, and indeed the rates of divorce in families who have a child with a disability are 1 in 2. Dads need support too. They need to be able to catch up with other blokes, have a beer, and talk about things. But men aren't always so good at talking about their feelings!

I'm not sure that there is an easy solution. Communication between couples is absolutely paramount. Even before having a baby, couples need to be educated on what kind of an impact being a parent will have on their lives. Support for fathers who have a child with a disability needs to be addressed, and it is the responsibility of Early Childhood Intervention Services to think outside the square and ensure that fathers are being empowered as well as the mothers.

One of my best friends commented to me the other day that David wasn't like any of the other husbands in our circle of friends. I acknowledged that, but also suggested that perhaps it is because both David and I have always had to be Ryley's arms and legs. We have always had to help him participate in things that other people take for granted. David is a father who is also a Carer. Just like I am a mother who is also a Carer. It's just a different role that he has to play.
And he wouldn't have it any other way.

Would love to hear peoples thoughts on the role of fathers, particularly in regards to fathers who have a child with a disability. 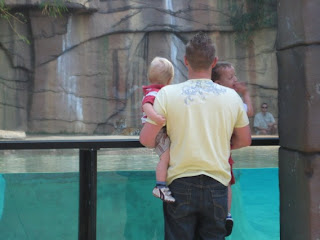