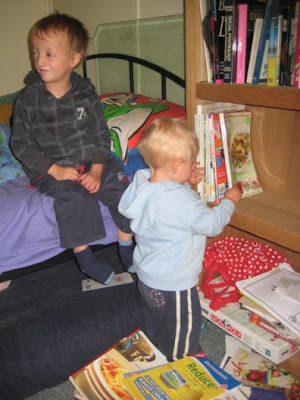 As much as I dread school holidays, I actually hate it when Ryley goes back to school.
The first week Ryley spent with David at work which he enjoyed thoroughly! The second week was spent with his little cousin Talia; playing in the park with his friends Zoe, Jack & Toby; and then out on the farm at Willaura with Veronica and Tyler. In amongst all of that we have pottered around the garden planting things, and he has spent a fair whack of time on the trampoline and swings (and getting into mischief/fighting with Braeden!).
This morning, he seemed nervous.
I think he got a little confused about where he was going until I got his school bag out. Then he seemed happy and waited at the front door for the bus (which was late!).
He didn't even say goodbye to me.
Braeden and I waved and waved until the bus turned the corner, but all we could see was Ryley's little head looking the other way.
*Sigh*
I don't know if he was mad at me, or if he just wanted the bus to keep moving.
I have really enjoyed the past week having both of the kids home. Hard work, but oh-so-much fun!