Hospital visits and WHAT??

June 10, 2010
For those of you on FB, or who follow Blog about a Bloke on FB, you will see that I slipped in some pretty cool news about Ryley's weigh-in yesterday at the RCH.
Now, as most people are aware, one of the characteristics of WHS is slow growth, so most of the children/adults tend to be fairly small.
This has always been Ryley.
He has always been tiny. In fact, he still is tiny.
The funny thing is, that now, he actually is on the "typical" growth charts for a child of his age. Allbeit on the bottom, but really, that is a mere detail.
Length wise, he is not really near the typical size of an 8 year old, but he is still growing upwards at a good pace, so I am happy.
In fact, I am happy that he is growing full stop.
Because, for a couple of years there, he really wasn't doing much growing at all. His weight really didn't change for two years (age 4-6). So it is quite a change to see him growing.

In some ways, it is a like a small victory to get on those so called normal charts. It is nice to see that he now has the weight he needs to protect him a bit more against those common illnesses. But it is also a bit like saying "in your face medical literature on WHS". It also reinforces that anything is possible with our kids. And, it is always important to trust your instincts. We fed Ryley orally up until he was 6 and 1/2 years old and we don't ever regret doing that. I think it was the right timing to go with a PEG feeding tube when we did. One day, I hope he will go back to oral eating, but right now, we are happy with where he is at.

Aside from the weight gaining thing, we did have all the routine testing done. Everything seems ok, except for his cholesterol which has gone up again. Not good. So, again, we wait to see what happens in 3 months time and go from there. In terms of the Ketogenic Diet, we will stay on it. We are actually going to increase the ratio up from 2.25:1 to 2.5:1. It is very much a case of slowly slowly with Ryley, because the changes in his body are always huge, despite the seemingly subtle difference in the ratio. We have also increased his dose of Keppra, and will continue to increase it over the next couple of months. While we had hoped to not increase his meds, we are hoping the good outweighs the bad and that we can once again get better seizure control. Means to an end, means to an end (I hope!).

So, overall, a fairly positive visit really. We do need the close monitoring still, and we have to follow up on a few things and looks like we are going to be spending a bit of time at the RCH between now and the rest of the year. But that is ok.

While we were down at the RCH we got to catch up with Melissa and Ellie and Liv and Elliott! It was awesome to see them!! We also caught up with Ryley's old physio Jo. She hadn't seen him walking, and she had put so much time and effort and belief into him when he first started school. It was great to see her too, but I reckon Ryley thought "uh-oh" when he saw her, because he kept away a bit!! I think he thought he might have had to start working hard for her..hehe!!!

Ok. Long post hey?
In other news, Braeden seems to have croup again. Oh joy. He is "sore", or so he tells me.
Here is a picture from our catch up at the RCH. Can't wait to see you guys again! 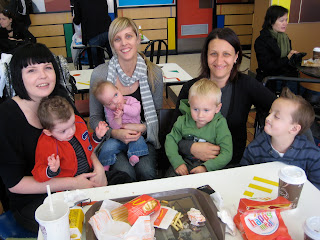