May 03, 2011
Truly.
I am the most excellent mother.
Hands up who thinks so.
That silence sure is deafening. It will remain deafening after I tell you all my latest moments of excellent mothering.

It began yesterday when I battled yet again with Ryley to dress him.
Braeden has also decided it would be fun to have a dressing battle with me too. So joy of joys, I battled them both yesterday.
Bus arrived.
We get up on the bus and one of the kids from Ryley's class says "Hey! How come Ryley isn't in his Pajamas?"
Ooooooohhhhhhhh Faaaarrrrkk!
Told the attendant to put Ryley in his seat as I jumped off the bus and bolted inside (I don't think the attendant heard me actually, and meanwhile Braeden was just partying somewhere on the bus).
Ran around like a blind woman searching for PJ's.
Oh. Yeah. That's right.
Don't have any clean ones due to vomit and...er...well...let's just say the pants were not clean.
Grabbed the top he had worn the night before and raced back out to the bus.
Shoved the attendant out of the way, well ok, she moved when she saw me coming.
Changed Ryley's top and clicked him in.
No problem.
Off the bus went on it's merry way.
Only then did I look for Braeden.
"I'm here Mum"
Oh good. Well that's that then.

I have actually forgotten PJ day before. It was only one other time. I can't remember how old Ryley was, but he was at daycare. So I reckon he must have been about 3 years old. I will never forget walking past the window to daycare and looking in, only to see oh my god every kid was in their pajamas.
I actually raced Ryley back to the car and all the way home. Changed him and took him back (probably much to the amusement of the daycare staff).
Later on that day, I get a phone call from the daycare to tell me not to panic, an ambulance was on the way, but Ryley was having a grand mal seizure (generalised tonic-clonic).
That was probably right up there with the worst days of my life.
I am tipping he was so freaked out by the fact that I was so stressed about him wearing his PJ's (confused more like it) that his brain went into overload.
Either that, or he was mightly pissed off with me.

Ryley came home from school. Seemingly unscathed from only wearing half his PJ's.
Now.
I got my new treadmill delivered yesterday (because it is winter almost, and getting out after tea for a run is impossible).
Cue: two very excited kids.
Me, being the awesome mother that I am, thought I would let them have a go on it.
Set it to the slowest pace and one at a time they had a turn.
They both loved it!
So I thought I would get on and show them a bit of running.
Had just started it a medium speed and turned around to see Ryley's arm caught at the back.
Safety stop immediately and nearly trip over in the process.
Pull Ryley's arm out and there is this massive massive burn on it.
He is holding his arm and just looking at me like what the hell did you do to me Mum.
I panic him as usual and he starts to cry.
Try to run it under water.
Nope, it hurts too much.
Try to soak it in the sink full of water.
No way.
Facewasher.
No.
Crap Crap Crap.

Take him to the hospital.
Braeden starts removing pieces of furniture from the playroom out into the emergency department full of people (I didn't realise until I saw people laughing in his direction).
Ryley makes out like he is fine.
It turns out to be a superficial wound only, but they want to dress it and bandage it all up.

It doesn't seem to be all that painful today, but it was definitely really hurting him.
Poor kid.
Sucks to have me as a mother.
Although his love of movement and all things that vibrate may have contributed to his accident. But he won't admit that.

So after all that shining example of good parenting.
Let me finish off the posts with some pics of the kids riding my sisters little pony Sunny.
Ryley has always hated being on a horse, but for some reason he has decided it isn't so bad after all.
Braeden is quite the natural and listens to instructions and knows how to kick the horse to make it go and pull the reins to stop. He made that poor pony do it a million times.
Hopefully we can make it a regular thing because it is so good for Ryley and his balance and body strength. Not to mention his confidence.
He was pretty good at listening to instructions too. 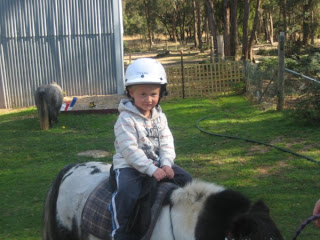 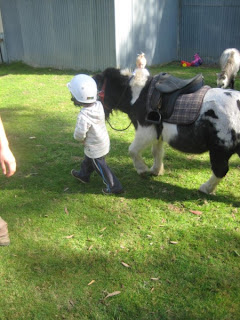 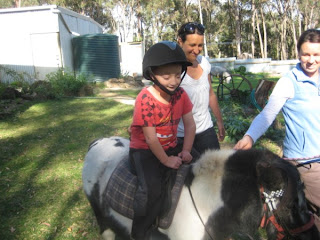