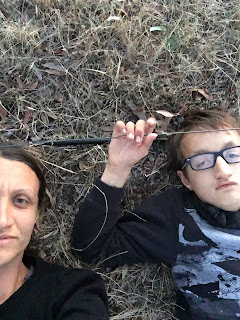 The footsteps awaken me from my sleep.
Suddenly, I feel a thud.
Ryley pushes me until I move across and he proceeds to get into the bed with me.
His Dad has left for work already.

First, he looks out the window.
Then, he pushes me some more.
He wiggles his body awkwardly and attempts to pull the covers over himself. And then I hear him grinding his teeth. He pulls his top and makes the sound that he repeats all the time when he wants something.
I turn over and tell him it isn't time to get up yet.
At those words he kicks all of the covers off the bed.
I am slightly annoyed now (and cold).
"Ryley, it is not time to get up yet"
I pull the covers back over us.
He grinds his teeth.
Repeats the sound.
Pulls at his top.

I manage to keep him in bed until 6:45am.
Time to get up.
I move out of the bed and he starts to cry as though in a panic and grabs my top.
"Ryley, it's time to get up!" I tell him, in an attempt to seem happy about it.
He is not fooled.

Most mornings, this is how my day starts. There are tiny variations, like when Ryley happens to sleep in until 6:45am. But basically, this is how it goes. Some days I just want to put my pillow over my head and pretend I have a 15 year old that will just go eat his breakfast, get dressed and pack his school bag. Maybe he could argue with me a bit, or I could nag him to hurry up. Maybe this 15 year old would be glued to social media or messaging his mates. He might even be ignoring me. Or not. Whatever.

I have a lot to learn.