Weekend weirdness and other such tales

December 03, 2012
I was all set to write a woe-is-me post this morning (seeing as I don't have to be thankful anymore), but now I really just can't seem to write it.
I think the month of being thankful has stuck in my mindset, and I can't help but counter every negative thought with a positive one.
That is pretty awesome actually.

The woe-is-me post was mainly going to be about how I have a cold, and the weather is cold, and I have a zillion things to do today and I feel like doing none of them.

Anyway, so instead, I have made a list, already crossed some things off (the ones that don't involve me going anywhere), have decided to make some shortbreads (because they taste good), and decided that having a cold (and being cold) gives me an excuse to have a nice warm cup of tea. Aaah. That feels better.

This weekend will have to go down as one of the weirdest.
For those not privy to the latest news from Sebastopol, you will have missed the fact that we experienced one of the strangest and scariest storms on Friday night.
It was literally a hail and wind storm that was so bad that it smashed Braeden's window (narrowly missing a sleeping Braeden), it stripped the paint from the side of the house, it damaged our car and utterly destroyed my beautiful fruit trees and vegie garden.
We actually survived it pretty well, others in the area had trees crashing on their houses and cars.
It was like a mini-hurricane blew through a narrow band of our town.

Here are some pictures:

Ryley had a wonderful time at his friend from schools birthday party on Sunday. Ryley doesn't really get invited to birthday parties (although, he has been invited to 2 school parties now this year!), so it was really nice to be able to go and for him to hang out with a couple of his friends.
I absolutely loved watching how the kids communicate with him (and how he communicates back) even though he is completely non-verbal. 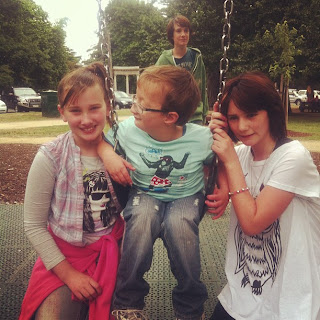 The other thing I really noticed was the fact that he really is a 10-nearly-11 year old boy. He is that age in his mind and I need to remember that more sometimes. Ryley realises his limitations, but it is not cool to have Mum hanging around. But in saying that, he made sure I was close by!!