Anyone would think the Olympics are on 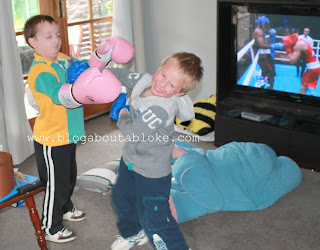 As you can see, my kids are a little excited by the Olympics.
Ryley is the main one who is totally obsessed with them!
I think it is the movement, and the colours that he loves.
But mostly, it is when things go wrong, like, say, a horserider falling off, or a diver making a big splash, or 10 cyclists crashing into each other.
He LOVES it!

From the minute he gets up in the morning until he goes to school he is glued to the TV.
We are lucky enough to have Foxtel, which means we have 8 extra HD channels, so we can flick through and choose what we want to watch. Luckily I can also record it, which means I will have a back up for when he is bored, because he mostly won't watch tv.

Tonight, Braeden decided he wanted to practice boxing like the two on TV.
They both punched each other while collapsing with laughter.
It was very funny.