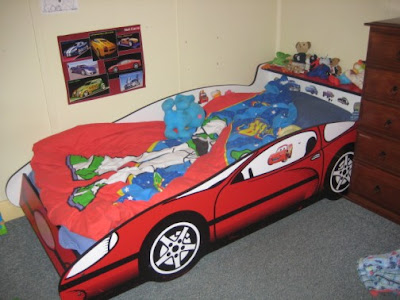 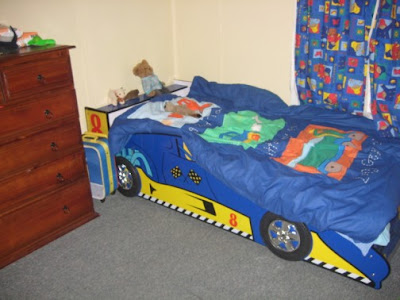 We finally relented on the weekend and bought a car bed for Braeden. Our current sleeping arrangements are this: Braeden and me sleep in the spare room and Ryley and David sleep in our room. This is mainly because it has just been the easiest set up. Braeden still feeds umpteen times a night, and Ryley also wakes often.
But it is something that we can't have forever.
The top picture is Ryley's bed, and the bottom one is Braeden's. Ryley has had his car bed for years and sometimes sleeps in, sometimes doesn't. Depends on how he is feeling.
Braeden did sleep for a couple of hours in his bed at least, and Ryley slept the whole night last night (that doesn't happen very often!).
The plan is to ease Braeden into his own bed gently. There is no rush.
Co-sleeping is a very important part of my children's upbringing and I would hate for them to ever feel distressed through the night (although obviously this will happen due to nightmares). Co-sleeping is still somewhat a subject that people don't talk much about, but for my generation of Mums, it is something that is slowly becoming the norm again. It is so much easier!
But it isn't for everyone which I can also understand. Everyone chooses to parent differently. Nothing wrong with that.

Today, I was so proud of Braeden.
We had to pick Ryley up from school early because he had vomited his feed up.
I let them both walk from the school entrance to the car. Braeden raced ahead like he usually does. Because he can. And Ryley just followed at his own pace.
Ryley had stopped about 2 metres away from the car because he was tired, and I watched with absolute joy in my heart, as Braeden walked back to Ryley and grabbed his hand so he could help him the rest of the way.

Braeden is so beautiful and caring. Even at such a young age, he understands that Ryley just needed a hand.